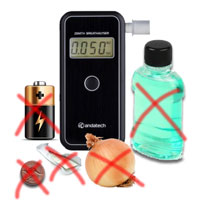 The show noted that using these items to cover the smell of alcohol may fool a person, but, since they will not actually reduce a person's BAC, there will be no effect on a breath analyzer test regardless of the quantity used, if any, it appeared that using mouthwash only raised the BAC. Pennies supposedly produce a chemical reaction, while batteries supposedly create an electrical charge, yet neither of these methods affected the breath analyzer results.

The Mythbusters episode also pointed out another complication: It would be necessary to insert the item into one's mouth (e.g., eat an onion, rinse with mouthwash, conceal a battery), take the breath test, and then possibly remove the item—all of which would have to be accomplished discreetly enough to avoid alerting the police officers administering the test (who would obviously become very suspicious if they noticed that a person was inserting items into their mouth prior to taking a breath test). It would likely be very difficult, especially for someone in an intoxicated state, to be able to accomplish such a feat.

A 2007 episode of the Spike network's show Manswers showed some of the more common and not-so-common ways of attempts to beat the breath analyzer, none of which work. Test 1 was to suck on a copper-coated coin such as a penny. Test 2 was to hold a battery on the tongue. Test 3 was to chew gum. None of these tests showed a "pass" reading if the subject had consumed alcohol.http://en.wikipedia.org/wiki/Breathalyzer